We encourage you to join the family on Friday, June 11, 2021 at 12:00 p.m. for an Online Memorial Service to honour the life and legacy of David Hazzard.

Simply copy the following website address into your web browser or click the link below, on that day, and refresh your screen just prior to 12:00 noon: LIVE.KINGSVIEWCHURCH.COM

A lover of God, family, the Church, and those the Lord called him to serve, peacefully passed into the arms of Jesus on the evening of May 27, 2021. Remaining at home, David’s family surrounded him, prayerfully singing at his bedside when the Lord called him heavenward.

To know David was to know the passion he had for his family. He was proud of being raised on a farm in Wallaceburg, Ont., with his parents, Russell and Margaret, who were wonderful role models, and brothers and sisters he kept close throughout his life. David partnered in life and ministry with his wife, Stacey, whom he adored, and cherished their four children, Joshua (Esther), Jordan (Joshua), Bethany (Philip) and Luke, and his much-loved grandchildren.

After experiencing a spiritual transformation as a young adult, David pursued a life of Christian ministry. He was a graduate of Eastern Pentecostal Bible College (EPBC), Emmanuel Bible College and Ontario Theological Seminary (now Tyndale Seminary). Following graduation from EPBC, he served on the pastoral staff of Kitchener Gospel Temple and Pickering Pentecostal Church. David, Stacey and their children then spent three years with the World Missions Division of the PAOC, David teaching at Pan Africa Christian College in Nairobi, Kenya, and serving on the leadership team of Nairobi Pentecostal Church.

Returning to Canada in 1988, Rev. David Hazzard accepted the position of senior pastor of Evangel Assembly in Edmonton, Alta. In 1994 he was invited to serve as senior pastor of Queensway Cathedral in Toronto, Ont. David was first elected to the General Executive of The Pentecostal Assemblies of Canada (PAOC) in 1998, while still pastoring at Queensway.

David was later elected to the role of executive officer in 2000, serving first as the assistant superintendent for Ministerial Services for the PAOC, and most recently as the general secretary treasurer (previously titled assistant superintendent for Fellowship Services). As general secretary treasurer, David gave oversight to all financial aspects of the PAOC International Office, including the annual budget, the Pension Fund and the Certificate Mortgage Program. In his various roles, David, along with Stacey, continued to champion and generously support the work of PAOC International Missions.

David, while serving as an executive officer, also provided interim leadership of Master’s College and Seminary. He remained a valued adviser and supporter of all of the PAOC’s educational institutions.

Spiritually and literally, David did not see mountains as obstacles but as heights of beauty to be climbed. He demonstrated that practically by reaching the top of Mount Kilimanjaro and making it to the base camp of Mount Everest, and in education by earning his Doctor of Ministry (D.Min.) degree in 2019 from Tyndale Seminary.

David served our PAOC Fellowship with excellence. He was a valued colleague and friend to his fellow executive officers and other leaders within the PAOC and the broader Christian community. He faithfully gave of himself in his executive officer role, stewarding his leadership responsibilities with diligence, and just before his passing, ensuring that his portfolio was shared with others.

Today, many rise up and honour David for a life well lived. He fulfilled his kingdom purpose with passion and integrity until the moment God called him home.

(David and Stacey Hazzard at the time of David’s re-election as General Secretary Treasurer for The Pentecostal Assemblies of Canada, General Conference 2018 in Victoria, British Columbia)

Our prayers continue for Stacey, David’s children and grandchildren and the entire Hazzard family in this time of significant loss.

TRIBUTE FROM A FELLOW EXECUTIVE OFFICER

Over four decades ago, a young adult man from Wallaceburg, Ont., made a crucial decision. He decided to do a 180 and completely commit himself to the lordship of Jesus. The kingdom fruit of that decision in the life of David Hazzard is what we thank our Lord for, as, with grief, yet with resurrection hope, we say a temporary goodbye to our friend and colleague.

Susan and I had wonderful seasons of sharing life together with David and Stacey. We first met them when David and I served as youth pastors in the Western Ontario District in the early 1980s, and eventually they became our pastors in Edmonton while we served in the Alberta District. What a pastor! It was in that context that our young families meshed in a lifelong bond. My entire family is in deep mourning at this time.

Through our shared journey of leadership at the International Office, including these past 13 years as fellow executive officers along with Murray, I have revelled in having David at our side. He was a man of wisdom, humour, empathy, generosity, integrity, accountability, scriptural knowledge and depth, impartiality, grace, and truth. He had gifts of faith, took personal interest in others, and was a champion to many. He was an example of love for Stacey, his family, the Church, and those yet to know life in Jesus. Oh, what a legacy he leaves—kingdom fruit.

All this was possible because what he valued more than anything at all, even as his death drew near, was that our Lord had shown him as a young man amazing grace, great mercy, spiritual freedom, and empowered him by the Spirit to be who he was called to be. David’s worship, his humility, and his faith in a loving, living God will stick with me until the day I die.

Thank you, Jesus, for placing David Hazzard in our lives and in our Fellowship.

TRIBUTE FROM A FELLOW EXECUTIVE OFFICER

“…Blessed are those who die in the Lord … they will rest from their labour, for their deeds will follow them” (Revelations 14:13, NIV).

We honour our friend and colleague, David Hazzard, who is now in the presence of God where his earthly deeds in service of his Lord have followed him. We will miss him.

Cindy and I first met David and Stacey on our way to Zimbabwe as new members of the mission family over 30 years ago. They welcomed us into their home in Nairobi and their warmth and hospitality were immediately evident.

David and I joined the General Executive at the same time in 1998. I always appreciated the great wisdom that he brought year after year. He had tremendous faith and courage, tempered with wise caution. His love of truth intersected with a heart of mercy and compassion that he modelled with godly character. He had an openhearted love for everyone who crossed his path. His capacity to communicate the truth of gospel with great clarity and simplicity helped so many of us when grappling with difficult issues.

He was a loving husband, father, grandfather, sibling, pastor, friend, and mentor. He can now rest from his labours and bask in the presence of the Lord whom he loved so much.

For further information, or to give to the David Hazzard Memorial Fund, we encourage you to visit the following links: 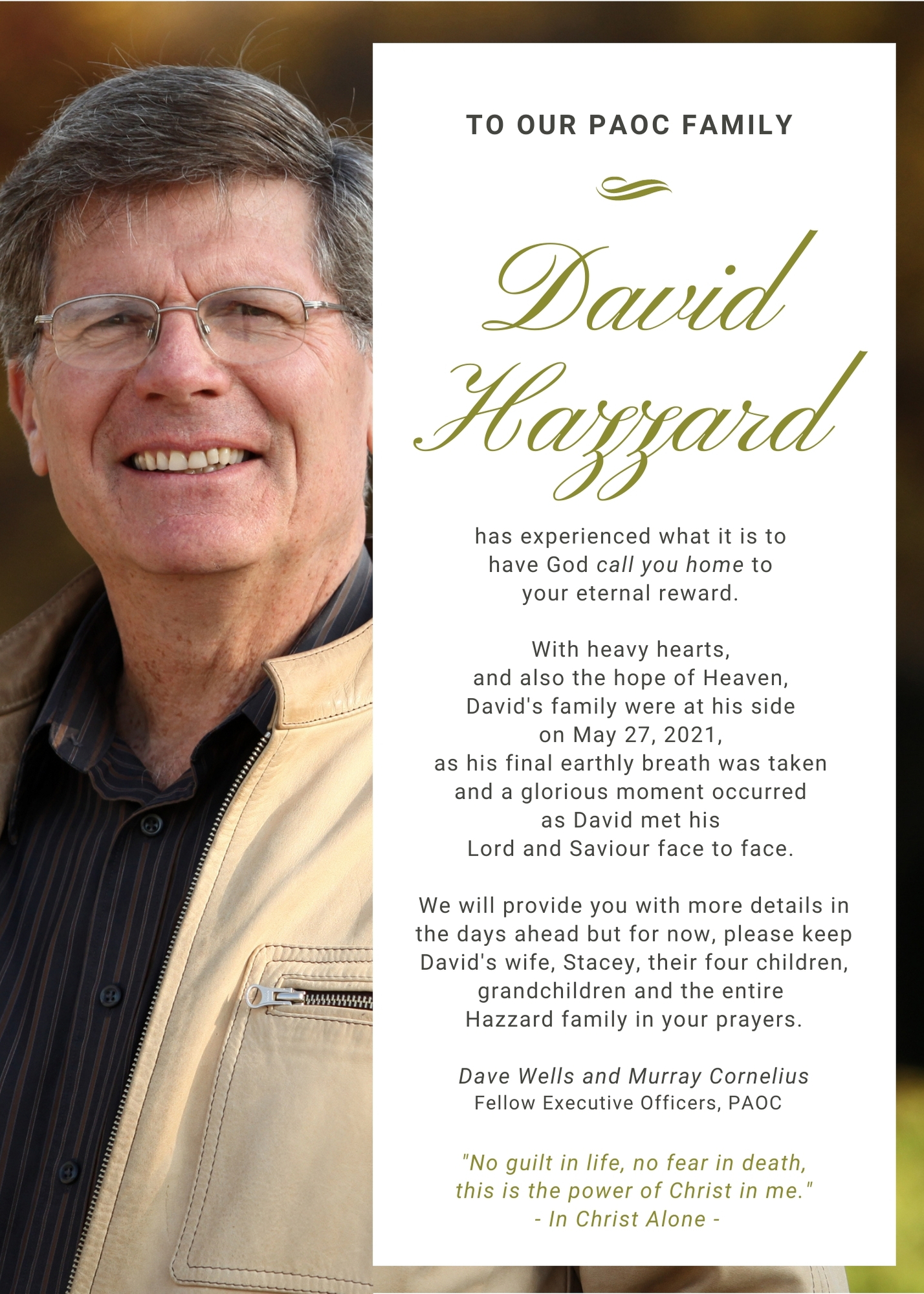