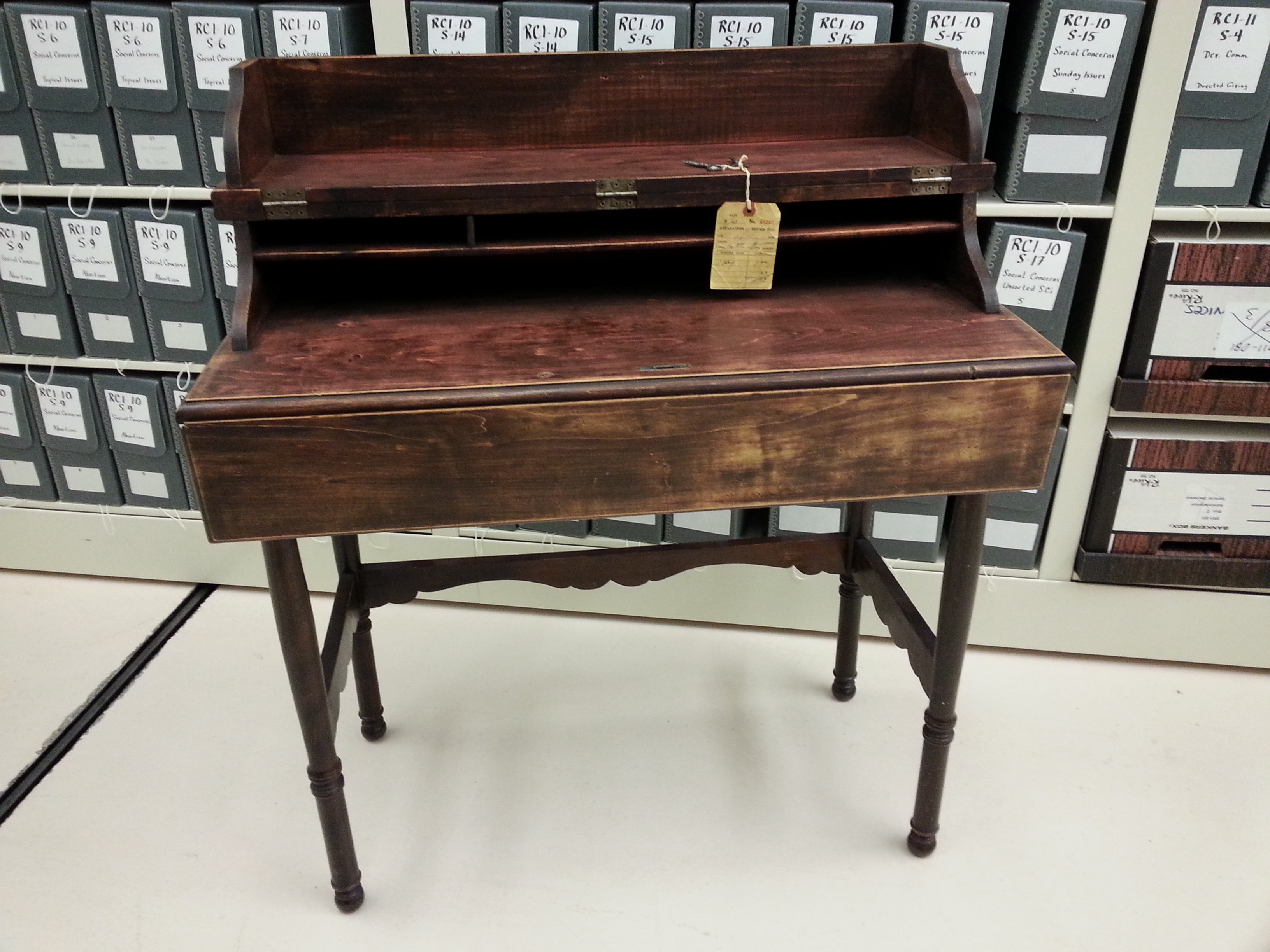 Recently the Archives acquired a beautiful secretary-style desk that belonged to Charles Baker, the founder of the entire PAOC work in Quebec. See below for the life story of this remarkable early PAOC leader.

Charles E. Baker was born February 18, 1872, in Belleville, Ontario. At 17 he accepted Jesus and served the Lord all his life. He married Annie Bush and set up business in Ottawa as a custom tailor in a haberdashery, a high-class men's clothing store. He became an active lay preacher in the Methodist church.

In 1911, Annie became ill with cancer. Charles heard about a Pentecostal mission that prayed for the sick and they were healed. The next day they went there. Annie was carried to the front seat where Pastor R. E. McAlister, Herbert Randall and others laid hands on her and prayed. She was instantly healed and walked home after the service. Her radiant Christian life continues until 1945. Because of this miracle, the Bakers began attending the Pentecostal mission. Here they received the baptism in the Holy Spirit.

The Bakers served the mission from 1912 to 1914. On August 23, 1913, Charles visited McBean (now Gracefield) in the Gatineau River community. 25 people were baptized in water. Charles knew he was called to full-time ministry. He sold his business and left Ottawa to pastor in Kinburn, Ontario, the first church owned by the PAOC. It still exists today as part of the West Carlton Church.

Charles was active in promoting the national Fellowship of The PAOC. Preliminary meetings for the organization were held in Montreal. When the federal charter was granted to the PAOC in Ottawa in 1919, C. E. Baker was named its first treasurer.

Charles had a great burden for Montreal. He and Annie moved there in 1916t. The Baker’s began a small work on Van Horne Avenue, and then to McGill College Avenue, next to the Empire Theatre on Stanley Street. They rented the theater and invited G. T. Haywood in May 1917 for a 4-week campaign. Three to four hundred believers were baptized. Evangelists Brother McCready and William Black soon followed. Running out of space, Charles moved the congregation to the old St. Andrew’s Church on Beaver Hall Hill in September 1919.

In 1920, the great revival under Aimee Semple McPherson was held. The city witnessed one of the greatest spiritual awakenings Montreal has ever known. Great healings were performed by God’s power as Aimee prayed. There were so many converts afterwards that larger accommodations were needed. The Bakers’ purchased the theatre on Drummond Street, renovated it for church services and lived upstairs. It was called Evangel Tabernacle, but was usually called the “Drummond Street Church.”

Charles became known as "Daddy Baker," and his unique ministry style of taking the Word of God, unfolding it to His people and waiting for God to give the increase was profound. He spoke a fourfold message of Jesus Christ as the Saviour, Healer, Baptizer in the Spirit, and the glorious coming King.

Evangel had spirited song services featuring the Drummond Street orchestra with hymns, joyful gospel songs and lively, upbeat choruses. Pastor Baker's favorite hymn was O for a Thousand Tongues, all five verses which he sang in reverse order the second time through! The Baker’s were spiritual parents to hundreds of faithful members in this close-knit church. Many great evangelists came to preach, including Smith Wigglesworth. Looking at “Daddy” Baker’s scrapbook (now part of the Archives) reminds us of the incredible meetings offered each week. Missions were the heart of the church and their yearly contributions placed Evangel as the top missions giving church in Canada.

Charles Baker went to be with his Saviour during the morning service on Sunday, July 13, 1947. Looking back, many people recount seeing indications that he knew his time was near. He was ready. It is difficult to find words that do justice to this great yet humble man. Perhaps the text used at his funeral by Pastor George Griffin, a former associate pastor, expressed it best: "There was a man sent from God . . ." (John 1:6).

Douglas Rudd, When the Spirit Came Upon Them (Burlington, ON: Antioch Books, 2002).