Wasaho/Fort Severn First Nation is located near the outlet of the Severn River into Hudson Bay in the northern most part of Ontario.

Wasaho/Fort Severn First Nation is located near the outlet of the Severn River into Hudson Bay in the northern most part of Ontario.  The community has a population of about 330.  The fly-in community has no road access except for a winter road from Thompson, Manitoba, for a few weeks of the year weather permitting.   In addition, a barge is able to bring supplies in August from Moosenee at the southern tip of James Bay.

In June 2011, a relationship between two churches began.  A major upgrade/renovation was completed on the Fort Severn Pentecostal church and adjacent apartment by two separate teams of volunteers from Glad Tidings Pentecostal Church in Sudbury, Ontario.   A Sunday morning service was held with church members and volunteers.  The church has had no pastor for several years but several women elders (grandmothers and great-grandmothers, pillars of faith), have teamed up to lead the church.  There was a big feast on the “Ridge”, located near the shore of Hudson Bay for the community and the volunteers.  The Ridge is a very beautiful setting and the feast is a wonderful time of fellowship with delicious food such as caribou grilled over a large open fire.

In July 2013, the relationship continued to grow when a small team from Glad Tidings Church performed a cosmetic upgrade to the sanctuary and more time was spent getting to know church members and the community.  Another Sunday morning service was held, led by one of the women elders in conjunction with the Glad Tidings Young Adults pastor. A second feast was held on the Ridge.

In June 2015, a major upgrade was completed on the underfloor of both the church and the attached apartment.  Stan Nissley from New Life Assembly in Sioux Lookout, Ontario joined the Glad Tidings team for this major floor upgrade.  Another church service was held together and another feast was held on the Ridge.

In July 2017, very little church renovations were required (thankfully because of the first three trips) and this latest trip was focused mostly on developing the relationship.  An amazing Sunday morning service was held with both Ojicree and English worship and both Ojicree and English preaching from the Word.  This year’s team included Mikko Pönni and André Bom from Glad Tidings Church in Sudbury and Rev. Dan Collado, the Director of the Aboriginal Bible Academy (ABA) in Tyendinaga, in Southeastern Ontario.  Dan facilitated a two part discussion session, titled “Parenting from a Biblical Perspective”, at the church for community members.  Another feast was held including a hymn sing praising the Lord on the Ridge.

Part of our 2017 trip included encouraging the young people, including a couple of very competitive games of volleyball, as the community can feel pretty isolated even with modern technology.

We learned during the 2017 trip that John Spillenaar flew to Fort Severn from South Porcupine, Ontario, in 1957, to lay the spiritual foundation of this church.  There are some elderly people that remember John from his trips to their community. 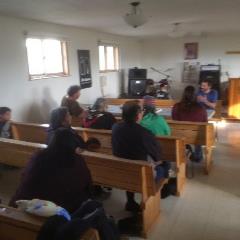 Grilling for the feast at the Ridge (July 2017) 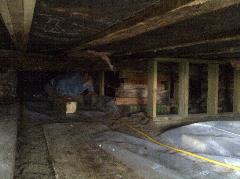